In spring or in autumn, Health Qigong enthusiasts in Southern and Northern Hemispheres practice at the same time.

Hand in hand, the BRICS countries endeavor to train more Health Qigong practitioners to promote the development of this sport.

Mr, Guo Hongfeng explained the purpose of the camp and expressed the wish that all participants could improve their physical and mental health and bring health and happiness to more people. Mr. Marcus said that Health Qigong as a sport of health and culture is very popular in the BRICS countries. And he believed that every participant could improve skills, enhance teaching ability and gain health and friendship through the training.

After the ceremony, Wei Yulong, associate professor from Beijing University of Chinese Medicine, gave a lecture of Health Qigong and Disease Prevention. Participants from 18 associations in BRICS and relative countries and HQ enthusiasts from all over the world attended the opening ceremony and the lecture on line. 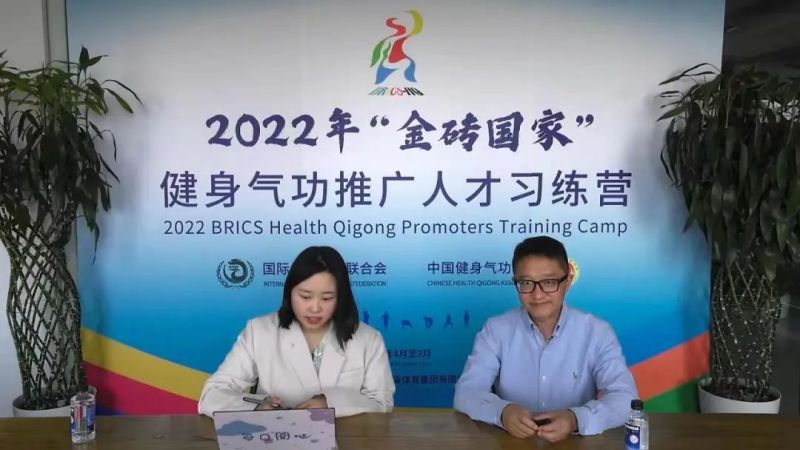 In order to meet the needs of participants and to enrich the courses and enhance the learning effect, four parts have been set up, including lectures, training courses of Yi Jin Jing and Liu Zi Jue, advanced courses and learning achievement show. After the training courses, leaders from associations in different countries, instructors and trainee representatives will gather together, reviewing the training, sharing teaching experience and telling touching stories.

A logo was designed for the camp to achieve consensus and create a brand. The logo is comprised of two parts: the figure of a Health Qigong practitioner and the abbreviation of BRICS Health Qigong. The figure is formed by “S”, “I”, “C”, “R” and “B” in a clockwise order from the top and the five colors of orange, yellow, red, blue and green correspond to the five elements of “Earth”, “Metal”, “Fire”, “Water” and “Wood”. The five letters are closely connected, indicating the combined efforts of the five countries in improving Health Qigong teaching and learning. The logo delivers the idea of colleagues from BRICS countries joining hands in sharing Health Qigong and building a harmonious world.

The BRICS Training Camp, proposed by CHQA and supported by IHQF, was established in 2021 by member organizations of IHQF in the BRICS Countries. The camp is aimed to train Health Qigong talents from the BRICS countries and neighbouring regions and provide health preservation solutions and Chinese wisdom, under the guidance of the BRICS spirit of openness, inclusiveness, cooperation and the pursuit of win-win solutions. The 2021 training camp was praised by numerous HQ enthusiasts and more than 570 trainees completed the training.