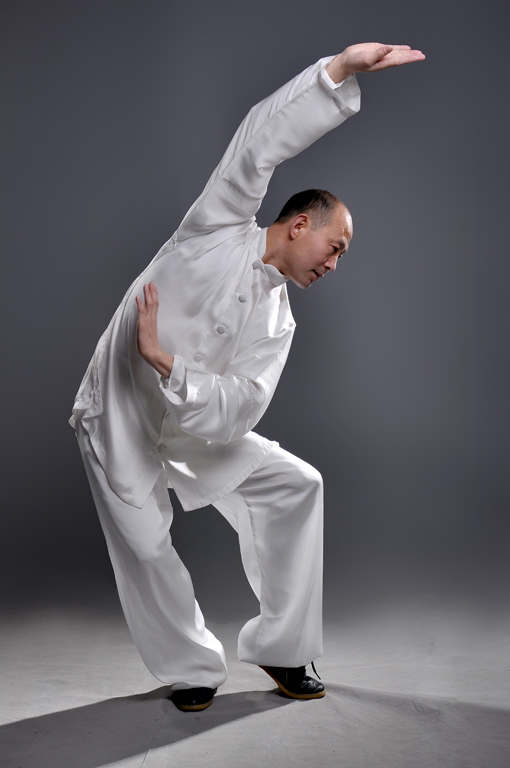 II. Keys and Essentials of the Movements

1. Coordinate the function of lung governing qi with the left and right backbone rubbing, to promote the ascending, descending, opening and closing of lung-qi. Backbone is the back ridge of human body, composed by 7 cervical vertebras, 12 thoracic vertebras, 5 lumbar vertebras, sacral vertebrae and caudal vertebras. The up and down centrums are connected, forming a “channel”, inside with spinal cord. The spinal cord, the downward extension of brain, midbrain and medulla oblongata, is the nervous centralis, where nerves are connected with zang-fu organs from inside and are distributed in all limbs and bones. Backbone twisting triggers all zang-fu organs. How to move in a rational, rhythmical and effective way? All the qi of zang-fu organs has one common feature that all the qi will change and operate the ascending, descending, opening and closing according to different functions of the qi. The lung operates the qi of the whole body and is in charge of respiration; the main qi functions are dispersion and ascent, as well as purification and descent, including the function of all the blood vessels meeting in the lung, as well as the regulatory functions of the lung. Therefore, Rub Backbone shall emphasize the correspondence between the stance and the functions of the lungs. The lung includes the left lung and the right lung, so the movements of Rub Backbone adopt the way of kneading the backbone from both the right and the left. It’s a way of stretching the left while bending the right, stretching the right while bending the left; it’s a way of tightening the left while releasing the right and tightening the right while releasing the left; it’s a way of ascending the left while descending the right and ascending the right while descending the left; it’s a way of replenishing Yin while absorbing Yang and replenishing Yang while absorbing Yin, to conduct the lung in charge of the qi, to promote the dispersion and ascent, purification and descent of the lung-qi, to ventilate the qi of zang-fu organs. All ventilated, all in good state.

2. Coordinate pressing Dadun with crushing Yongquan, to replenish the qi and to send up. Yongquan is the starting acupoint of the kidney channels. The kidney stores up the essence, which is the base of the qi. The lung is in charge of the qi. It purifies and descents the qi, which the kidney stores up. The lung corresponds to the metal; the kidney corresponds to the water; the metal generates the water, which can promote functions and start functional activities of the qi. Press Dadun while crush Yongquan. Dadun is the starting acupoint of the liver channels; the qi of liver has functions of sending up and regulating to ventilation, as well as the function of free coursing. It can accelerate dispersion by stimulating the liver channels, combined with the purifying and descending of the lung to reach the goal of “attaining a state of harmony by ascending the liver and descending the lung”. On the other hand, crushing Yongquan and pressing Dadun apply the rotating manipulation to fully rotate condyle, knee and hip joints. The important acupoints of the three yin meridians and the three yang meridians on feet are mostly located at the main joints of the lower limbs. The act of rotating them already induces the flow of qi and blood, and ease joint movements. Therefore, the relax after rotating is more important. Rotating is for “exercising”, while rotating back is for “nourishing”; when do the nourishing, relax and do it in a soft and slow way, to cultivate a restraining stance.

3. Coordinate the stretch of arms with “pushing the bow (Tui Gong)”, to realize the promotion of dispersion and ascent as well as purification and descent. The stretching of arms is an extension of the trunk stretching. For the movement, the stretching presents an arc line conformed with the lower limbs and the trunk. The important acupoints of the three yin meridians and the three yang meridians on hands are mostly located at the main joints of shoulders, elbows and wrists. Coordinate the stretching with the stretching and dispersion of the lower limbs and the trunk; stretch in a relaxing and soft way, to provide “windows” for dispersion and ascent and “roads” for easing joints, to operate the function of ascent and conduct with dance. On the other hand, the arms pushing the bow need to “assist”. The side of stretching is extending, which means ascent, dispersion, refining and yang; the side of pushing the bow is bending, which means descent, restraint, nourishing and yin. For that, combining the stretching side with the pushing side can lead the ascent, dispersion, descent and purification of the qi functional activities in a moderate way. Turning the head is beneficial to the side stretching of the backbone, from bottom to top, up to the neck, joint by joint. The key to the movement is to turn the head slow and relaxingly. Only when relax and slowly move the small joints of the backbone, can the stretching be accomplished from relaxing. If the head is tight and the neck is inflexible, the ligaments connecting the centrums will be very tense; if the ligaments remain tense and tractive for a long time, harms and injuries will be caused easily. Looking downward has the function of descending the qi functional activities, to regulate the qi activities and prevent them from over-dispersion and over-ascent, because over sided stretching is harmful. Meanwhile, looking downward is helpful for the restraint of the qi activities when do side bending, which will prepare for the next movement.

4. When operate the side stretching, it is asked to present an “arch” by the legs, the trunk and the arms of the stretching side, and to relaxingly and gently extend the condyle, the knee, the backbone, the shoulder the elbow and the wrist, from bottom to top, joint by joint. The process from side stretching to side bending cannot be neglected. Exercise when stretching; nourish when bending; restraint is proper to be done when nourishing. Therefore, when changing the stretching to the bending, all joints of condyles, hip, backbone, shoulders, elbows, wrists and fingers should be restrained and inner-nourished from bottom to top, joint by joint.

5. It should be gentle and easy to move when take the foot up or set the foot down. Moving steps should be smooth and steady. When control the hip and lift the knee, move by the drive of the waist, and the movement range shall be adjusted from person to person. Coordinate the breathing with the movements; inhale when raise the arms while exhale when drop the arms. The side stretching and side bending of the backbone can enhance the extensibility, flexibility and muscular strength of the ligaments surrounding backbone joints, to maintain the stability of joints; side bending, side stretching and leg extorsion are helpful for dredging the liver-qi and dispersing the lung-qi.