According to the basic principle of biological control mentioned above, we can make a heuristic analysis of Health Qigong regulatory principle so as to discover certain implied laws in depth. This kind of laws can be expressed well especially in comparing researches between biological feedbacks.

Biological feedback is a certain process in which special signals will be extracted from the human body by some particular instrument, and informs the very person in an appropriate way so that he consciously corrects deviations in the accordance with feedback information, to realize self-control and self-regulation. After certain training, human can gain the ability of self-control on their physiological process in some degrees. Obviously, this kind of biological feedback technique prevailing in the West can be regarded as a kind of simple primary Qigong, and a behavior system with certain purpose, namely, the system of the brain and mind to actively regulate and control physiological and visceral activities. However, there exists an obvious difference between biological feedback and Health Qigong in feedback media and feedback channel. 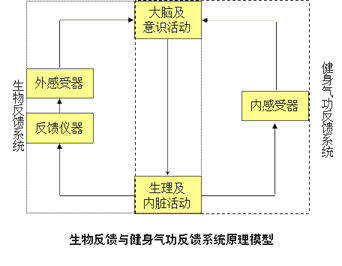 It can be seen that biological feedback principle can be regarded as an establishing, consolidating and developing process of an external feedback ring between the brain activities and the organism activities, conscious domain and non-conscious domain, psychological process and physiological process; while Health Qigong is an establishing, consolidating and developing process of an internal feedback ring. Specifically speaking, the regulation of Health Qigong is the process to strength the body, preserve health and achieve recovery. In the process, human utilize the techniques of the exercising of human body and mind, such as regulating body, breath and mind and so on, to establish and strengthen the internal feedback loop and reaction, so as to actively perceive and control the self-physiological and visceral. Of course, the connotation of Health Qigong regulation is much plentiful and abstruse than the biological feedback. Here we just offer a topic for open discussion. Whether the theory is right or not, it still needs to be verified by a great number of practical experiments.