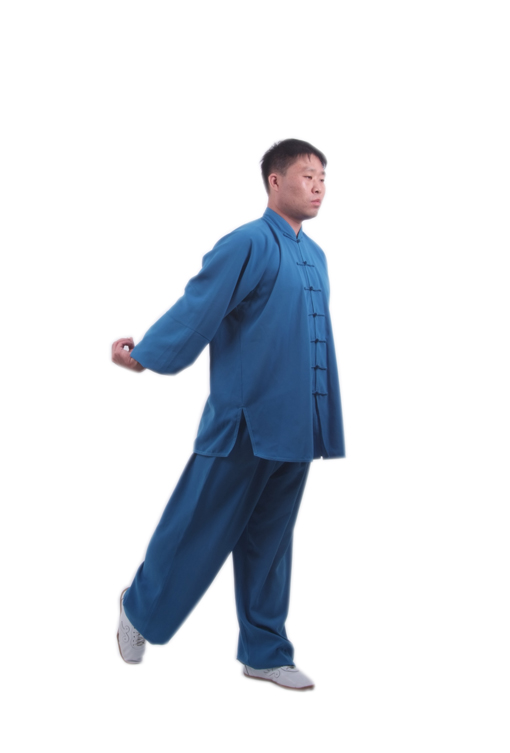 “The Advent of the Phoenix” is the 11th routine of the Health Qigong Daoyin Yang Sheng Gong Shi Er Fa. An ancient poem reads: “Phoenix sings in the flourishing age. Dragon has its own descendants.”  Phoenix is a mythological bird, one of the Four ancient sacred creatures in China (the other three creatures are dragon, turtle, and unicorn). It is believed to be the king of all birds. For thousands of years, the phoenix and the dragon occupy very important positions in Chinese traditions. The culture of them is widely spread.

We can also know from historical records that the cultural meaning of dragon and phoenix developed and changed over time.  For example, the dragon was once used as the symbol of men(the emperor), and the phoenix as that of women (the queen). The royal family believed the two creatures can bring them prosperity. The phoenix design was also widely used in common households. The design of a phoenix flying to the sun was called “Danfengchaoyang”, and the design of a phoenix and a unicorn was called “Fenglinchengxiang”. In conclusion, the phoenix is a kind of lucky bird and is very popular in Chinese culture. Wang Shizhen, a litterateur lived in the Ming dynasty wrote a poem for the bird.

“A bird with five colors is flying towards here. Its name is phoenix.

It is very rare and can bring prosperity to our country.”

Judging from the movements of “The Advent of the Phoenix”, a routine of the Health Qigong Daoyin Yang Sheng Gong Shi Er Fa, their functions can be concluded as follows:

I. Arms turning internally and externally can help dredge the three yin meridians and three yang meridians of hand, thus achieve the effect of “relieving pain by dredging”.

“Three yin meridians of hand (lung, heart and pericardium) stretch from viscera to hands. Three yang meridians of hand (small intestine, large intestine and triple energizers) stretch from hands to head.” Specifically speaking, lung meridian of hand-taiyin starts from middle energizer, goes down to the large intestine, winds the cardia, passes through the diaphragm, belongs to the lung, goes horizontally to the outer upper part of the chest, goes down along the anterior borders of the medial aspects of the upper arms...until arriving at the thumb tips (Shaoshang point). The large intestine meridian starts from the radial ends of the index fingers (Shangyang point), passes the opisthenars, goes along the anterior borders of the extension sides of the upper arms, goes up to the shoulders, reaches Dazhui point, goes down to the chest, and winds the lung. These two meridians are of exterior and interior relations.

The pericardium meridian of hand-jueyin starts from the chest(chest center)..., goes along the median lines of the medial aspects of the upper arms and into the elbows, passes the wrists, goes into the palms (Laogong point), and stretches out from the radial sides of the middle fingers (Zhongchong point). The ramus of this meridian goes from Laogong point, passes the ulnar sides of the ring fingers (Guanchong point), and reaches the shoulders through the lateral aspects of the upper arms...  It is successively connected with different parts of the triple energizers meridian of hand-shaoyang which belong to the upper energizer, middle energizer and lower energizer.

The heart meridian of hand-shaoyin starts from the heart, goes along the posterior borders of the medial aspects of the upper arms, passes the elbows, reaches the little fingertips, goes along the opisthenars and goes up the posterior borders of the lateral aspects of the upper arms... The small intestine meridian of hand-taiyang winds the heart and goes down to the small intestine. These two meridians are of exterior and interior relations.

According to TCM, in normal condition, qi and blood can travel to anywhere freely in the meridian system. If the body is harmed by the pathogenic factors of wind, cold and dampness from the outside, or by the seven emotional factors from the inside, the meridian will be clogged, making it hard for qi and blood to flow. This can cause various kinds of diseases. When the exerciser is doing the routine of “The Advent of the Phoenix”, he should carefully turn and twist his arms, making turning and twisting the start and also the end of his movements. Practice shows that this characteristic can dredge the three yin meridians and three yang meridians of hand nicely.

Also, according to mechanics studies, the movements of twist and turn not only accord with the basic law of human body natural activity, but also have longer torques. The equation is M(torque)=F(force)×L(arm of force). We can find that the twisting and turning movements can effectively increase the stressed area of the rotating part. It is easy to understand that these movements can improve the curative effect. These movements can also promote the physiological functions of the nervous system, muscles, bones and other body parts.

II. Moving upwards with foot stretching tightly, then moving downwards with foot hooking and putting hooking hands behind back. These movements are beneficial to the twelve Jing-well points and Yuan-primary points and can make the health nourishing process more effective.

Health Qigong Daoyin Yang Sheng Gong Shi Er Fa emphasizes on “twisting and turning in every movement” and “moving the tips of the limbs and making wrists and ankles more flexible”. Body parts below elbows and knees, especially fingertips, toe tips and ankles should be fully exercised.

The TCM shows us that finger tips and toe tips are the location of Jing-well points. Their locations and functions can be checked in table 1.

These points can be compared to the sources of “water”. They are the points where meridian qi are produced, just like a well producing water. So they are called Jing(The Chinese word for well). Thus, when people are exercising Shi Er Fa (especially “The Advent of the Phoenix”), they should practice with their hands hooking regularly and make their Shaoshang point and Shangyang point meet. This is helpful to the activation of the six Jing-well points of the three yin meridians and three yang meridians of hand, dredging these six meridians, eliminate the clogs inside them, make qi and blood flow smoothly and prevent related viscera diseases.

“The Advent of the Phoenix” in Shi Er Fa uses this principle into practice. Through frequent and regular movements of wrists and ankles, we can massage the twelve Yuan-primary points three yin and three yang meridians of hand and foot by ourselves, “using fingers to replace acupuncture needles”, thus maintaining vital qi and fighting against diseases and pathogenic factors.

III. Palms and arms opening and closing in front of the breast can help promote the functions of the five viscera and six bowels

The opening and closing of arms includes their opening parallelly, attaching to each other, going up, going down, stretching out and embracing back. It is fully shown in the Shi Er Fa and “The Advent of the Phoenix”. According to the TCM theories, the opening movement belongs to yang and the closing movement belongs to yin. The two movements are in a unity of opposites. When practicing, the using of mental concentration and the gentle, smooth, deep and long abdominal breathing also help. Research shows that these practices can dredge meridians, making qi and blood flow smooth and realize the meridians’ function of balancing yin and yang, facilitate the bone, tendons, and joints. They can also maintain vital qi and enhance functions of heart, lung and other viscera and prevent the invasion of pathogenic qi. Still, they can make exercisers feel that they are in the broad world of qi and reach the ideal realm of heaven-and-human unity.

It is proved by practice that repeatedly practices of the opening and closing movement can help strengthen the heart and the lung, moistening the intestine, eliminate the clogs, dredge the triple energizer, gather qi, activate blood, and promote the flow of yang. This is a brief summary of the cultural connotation of “The Advent of the Phoenix”. An ancient poem says: “A pair of flying colorful phoenix are the sign of a brilliant future. Two flowers grow side by side on the same stem stand for prosperity.” I hope my three points can attract better insights. Free discussions are welcomed.