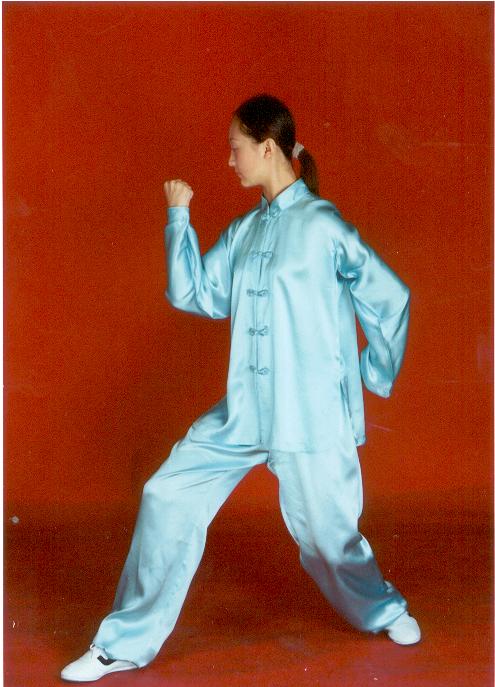 The origin of the question: In one morning at the end of 2002, I and staff of Wangcheng Park were exercising Health Qigong ·Yi Jin Jing, and interestingly, it is only after I had finished my exercises did I notice that Professor Shi (Shi Aiqiao by name) from Wuhan Sports University had been there watching me for some time. He told me that while I was exercising Health Qigong, my focus is fully on it. Likewise, it is only when I had heard the words of command in Health Qigong·Yi Jin Jing that legs tight, stand easily… vision contained , breathe naturally, heart at ease,…left foot half-step opening … vision contained  and eye expression held, did I realize what I did just now is just what the words “vision contained ” mean. Then what’s “vision contained”? How to do it? And what the relation between looking at the front horizontally and looking at the front downward? I had been thinking about those questions for quite a long time. Then in 2009, when I read the article On Eyes and Health Qigong by teacher Zhang (Zhang Liang by name) published in the magazine of Health Qigong, All of a sudden I was inspired.

“Vision Contained” refers to the state that the vision of the eyes is held and contained without noticing anything else. “Eye expression held” refers to the slowly withdrawal of the vision after looking at the front, with thought taken back while integrating with vision into one. “Held and contained indicates the balance between eye expression held and thought kept, while “without noticing anything else” means “eye expression held and no blink of eyes occurred, and there are closely related. “Eyes are windows to the soul.” So one’s inner world can be known from his eye expression. The Medical Classic of the Yellow Emperor·Ling Shu·Da Huo Lun reads that “eye expression is subject to the mind, which in turn is influenced by thought.” Therefore, we say “thought in fact is from eyes.”

It is often seen on the Health Qigong exercise playground that some are not in a state of true Health Qigong exercises, the fact of which is manifested by their widely opened eyes; some are not in a state of tranquility with their thoughts dispersed, which is shown by their blinking or fast-moving eyeballs; some made their actions and inner thoughts separated with their eyes looking at somewhere else; others are prone to doze off because they closed their eyes while exercising Health Qigong. All of these are far from “vision contained”, hence the affected effects. In The Medical Classic of the Yellow Emperor·Ling Shu·Da Huo Lun, there is also expression “only when all essential qi of the viscera are held in the eyes, can it be called being essential.” Eyes are the places that all essential qi of the viscera are converged, so it should be kept as possibly as could be. It is reported that the energy consumption of the eyes for information obtaining accounts for a quarter of the whole bodily energy. Therefore, when exercising Health Qigong, one of important ways to save energy is to relax the eye muscles so that the state of “vision contained” is achieved.

There are three possibilities: First, if as required to look at the front, then eyes should do so, a case in point is the ready position in Health Qigong·Yi Jin Jing. Next, if as required to look at the front downward, then eyes should obey too, for example, Wei Tuo Presenting the Pestle 1, 2 and 3 in Health Qigong·Yi Jin Jing, displaying paw-style palms like a white crane, three plates falling on the floor and the closing form. Lastly, eyes should do as that is required by gestures, for instance, plucking a star and exchanging a star cluster, pulling nine cows by their tails, nine ghosts drawing swords, black dragon displaying its claw, tiger springing on its prey, bowing down in salutation and swinging the tail in Health Qigong·Yi Jin Jing. All these three types of gestures of eyes are conducted under the condition of “vision contained”, while eyes looking at the front horizontally and downward are done with head and neck up straight.