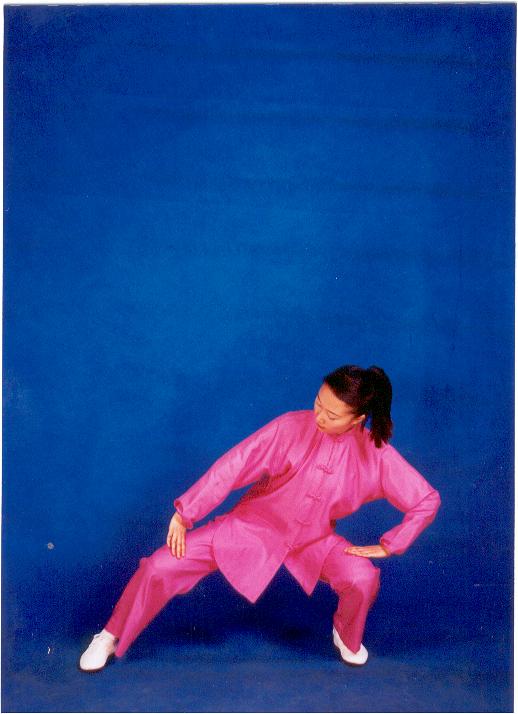 Then, how could people exercise reasonably in practicing the method of “Swinging the Head and Lowering the Body to Relieve Stress”? Several main points to follow the principle of “exercise reasonably” will be introduced here: First, capturing the degree of the process nodes. Pull slightly when going up, be relaxed when turning right, be slowly when going forward, stretch slightly when turning left, be flexible when going backward, and be steady when going down. Reflect and seize the degree in the process nodes, gnosis the transform of process nodes and enhance the effect of practice by exercise reasonably. So exercisers should capturing the main points of the movements routine at first in opening phase of practice, then it is not difficult to have got movements routine right, gnosis the main points of the motion and variation of the figure body and show up the technical style of slow and gentle and coherent. Second, master the degree of eyes well. Expression in one’s eyes, which is very important, and the figure body are like the base line. If the positioning of expression in one’s eyes is accurate, the figure body may get in place basically. In other word, if the positioning of the figure body of exercisers is not accurate, expression in their eyes will be difficult to see the accurate part of the body. For instance, at the time of turning the sight, upper body leans rightward and looks at the right tiptoes out of the corner of one’s eye, upper body whirls forward and moves to left and the sight changes to right heel from right tiptoes. At the time of shaking one's head, the sight changes to left foot from right foot with the turning of the rump and the routine of the sight is that from the outside of the left foot to the outside of the left leg to left shoulder to the head. At the time of turning to the right side of the body, exercisers should look forward. Third, learn well the degree of stretch in reverse direction. In the method of “Swinging the Head and Lowering the Body to Relieve Stress”, the rump and neck of the backbone is counter motion except the process of going up and turning the right side. When the upper body leans rightward, the neck end is rightward and the rump end is leftward. When the upper body leans rightward, the neck end is rightward and the rump end is leftward. When the upper body leans forward, the neck end is forward and the rump end is backward. When the upper body leans leftward, the neck end is leftward and the rump end is rightward. When Swinging the Head and Lowering the Body, the neck end is backward and the rump end is forward. The backbone is able to be sufficiently stretched and revolved in the moderate movements. Fourth, master the relaxed dynamics of the neck. The muscle tensions of the neck directly influence the positioning of the neck end and chest end of the backbone, which do not only give people the impression of discordant and stiff movement, but also lead to malfunction. Such as, squaring one's shoulder, which will cause the forcepoint going forward to the Tiantu Point, goes against the relaxation of the Dazhui point. Thus, to learn by heart the degree of “swinging the head” means that do not put forth one's strength actively. The head whirl by making good use of its self-weight and the eyes look at the top of the head. Only in such a degree, the neck is able to be relaxed while swinging the head. Fifth, keep in mind the degree of abdomen in when “swinging the rump”. A lot of exercisers arch the back and bent over when they practice “swinging the rump” forward, which is because that they do not abdomen in when “swinging the rump”. “Swinging the head and lowering the body” are movements acted in the meanwhile. Except for the relaxation of the muscles on the neck, other muscles from the chest to the abdomen share a tense feeling. The degree is that chest contracting slightly and contraction of the abdominal muscles. In this way, exercisers can ensure that the rump adduction and turning the right side. Sixth, master the force degree of Jiaji muscle, which refers to the erector spinae muscle on the back. It is not only the tie which connects the head and the waist and buttocks, but also the key whether the movements are powerful. When the Jiaji muscle relaxes, people are unable to pull oneself together and the movements are feeble. The key to control the Jiaji muscle with strength is that keeping the waist unbend and the neck upright, the Baihui point pulling up, the lower jaw tighten slightly and looking forward. The movements can have a sense of coordination, in the way of merging Qi into the movements and interaction between spirit and figure body. When people practice the method of “Swinging the Head and Lowering the Body to Relieve Stress” in Health Qigong • Ba Duan Jin, we can experience the essential of exercise reasonably from the six aspects above and then deepen the understanding of the entire exercise method.

All in all, practicing the method of “Swinging the Head and Lowering the Body to Relieve Stress” in the moderate and reasonable way is totally possible to achieve the heart-kidney harmonious interaction. It is also the tidemark that all theories and stance of the Health Qigong pursue. Just as our wise ancestor says, “Keep the anger, grief, joy and happiness in the mind but not express them, which are called “be moderate”. Emotions are expressed justly, that is called “harmony”. “Be moderate” is the basis to achieve the stability of the world. “Harmony” is the philosophy of life and behavior conducting. Achieving the moderate and harmonious state, things in the universe take their proper places and all things on earth spring forth.” If people can cultivate their life with the idea, that is “be moderate and harmonious”, their life will prolong. Wise men regulate their emotions and live in peace to nourish their life. If the mind and the will are in harmonious proportion, people will concentrate and think quickly, the soul will act normally without anger or regret, and then the internal organs will not invaded by the evil Qi. People who are in the moderate and harmonious state will surely live a long life.