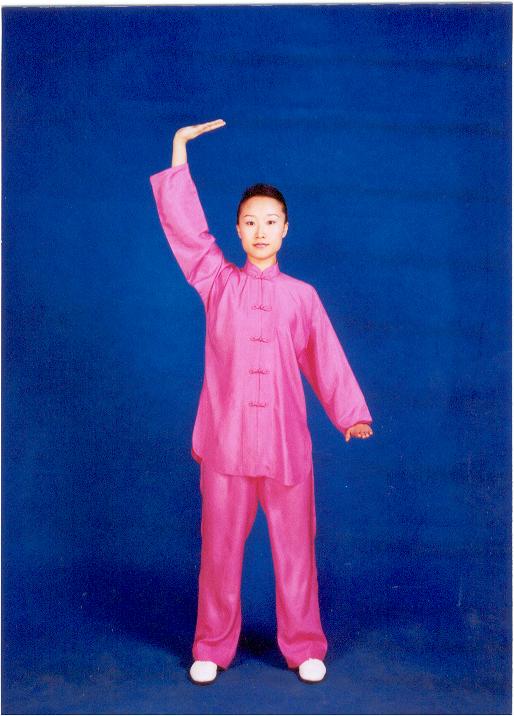 From the means and methods of its sense, using the moderate way refers to the technology and method chosen in the practice. It is different from holding the moderate way in the methods, and the most obvious character is that it is more concrete. Stomach and spleen are in the center, at the same time, they have the important function of digestion and absorption, which is the energy source of body. As long as the normal functioning of the spleen and stomach, as well as the tissues and organs, people will not suffer the diseases; if the spleen and stomach, as well as the tissues and organs not work well, people will suffer the diseases. First of all, keep fitness in the moderate way, namely: keeping the health of stomach and spleen contributes to the fitness. Therefore, body building must keep the moderate way. Of course, there are lots of ways to strengthen the stomach and spleen, and the theories of "Holding Arm Aloft to Regulate the Functions of the Spleen and Stomach" depend on the following factors.

First, diffuse in the center. It means that the origination and transformation of Qi and blood of the human body stem from the spleen and stomach. The diffusion refers to the drifting muggy clouds. The meaning of "diffusion" is that the development in the chaotic atmosphere, which means the chaotic air drifting everywhere. It is the variation course that the lightly rising air is transported to the heaven, and the heavy and muddy air is transported to the earth. The diffusion means the hot and humid water vapor, which is to say that the chaotic atmosphere is muggy. White tiger- Marriage has cited the words of The Book of Change, it said, "The diffusion of the heaven and earth, all things are pure". It means that "the world is transformed by the muggy chaos air; then the Qi of heaven going down and the Qi of earth rising up, the interaction of them lead to the metaplasia of all things. The truth expressed in the above text has almost explained the transformation and interaction between the spleen and stomach. On the one hand, it provides the conditions for generating and transforming Qi and blood of the stomach and spleen. Spleen and stomach are the main organs of digestion. The spleen governs the blood and takes charge of the transportation and transformation. The stomach takes charge of receiving and digesting food. The smooth spleen Qi is the ascending Qi, the harmonious stomach Qi is the descending Qi. The two meridians contact with each other, therefore, it is the interaction condition that the diffusion of Qi and blood starting from the stomach and spleen. On the other hand, it has pointed out that the inevitability of the diffusion of Qi and blood stemming from the stomach and spleen. The stomach and spleen match the earth in the five elements and centrally located. The spleen and stomach coordinate with Yin and Yang, dampness and dryness. The digestion and absorption activities are naturally organized by the stomach and spleen. It is obvious that the benefits of the routine "Holding One Arm Aloft to Regulate the Functions of the Spleen and Stomach" are resulted from that the stomach and spleen governing the origination and transformation.

Secondly, dredge the meridians of the middle burner. The stomach and spleen all belong to the middle burner. The middle burner, upper burner and lower burner are collectively known as Triple Burners. The middle burner governs the transport, i.e. digesting food, transportation and transformation of the essence, to cultivate Qi and blood, so it is called that "the middle burner takes charge of the retting. “The "retting" is the bubble floating state when digesting food. The routine "Holding One Arm Aloft to Regulate the Functions of the Spleen and Stomach" contributes to regulate the spleen. The movements of rising and pressing in this routine have fully stretched the abdominal cavity, which can stimulate the spleen meridians and dredge the middle burner. If the middle burner fails to work, the spleen will be sick, the essence of water and grain cannot be transformed into Qi and blood, which may cause the gastrectasia, abdominal fullness, being stuffy and so on. The spleen channels of foot-taiyin mainly circulate through the chest and abdomen, which is the external reaction line of the spleen. In this routine, the repeated stimulation of the spleen meridian, dredging meridians, can strengthen the functions of spleen in governing blood and transformation. The food essence are transformed into Qi, blood and body fluids, and transported to the internal organs of the body through the heart and lungs, in order to support the human life and activities, as well as prevent and cure the diseases due to the spleen disorders. The routine "Holding One Arm Aloft to Regulate the Functions of the Spleen and Stomach" contributes to regulate the stomach. The movements in this routine can repeatedly pull the abdominal cavity, and play the role of massage and regulation on the stomach. Stomach Qi transports the essence of water and grain to the intestines, and keeps the change of deficiency and excess of the stomach and intestines, so that the digestion function runs normally, Qi and blood are abundant, thus the stomach Qi governing the descending. If the stomach Qi did not descend, people may suffer the epigastria fullness or stomach pain, etc.; the adverse rising of stomach qi may cause hiccups or vomiting embolism, etc.; the stomach dysfunction, body fluid deficiency or excessive stomach fire may cause the large intestine constipation, bloating, abdominal pain and other symptoms. In this routine, the repeated stimulation of the stomach meridian of foot-yang ming in the chest and abdomen can dredge the meridians and enrich the stomach Qi, as well as promote the circulation of Qi and blood in the related organs; at the same time, you can also cut off the development pathways of the stomach diseases and prevent the incidence of stomach.

Third, hold the moderate way with applying two factors. To regulate the origination and transformation of Qi and blood of the stomach and spleen, focusing on the stomach, spleen and the middle burner is only one of the ways to strengthen the stomach and spleen. Human health is the mutual effect results determined by various factors conducive to the health. The same is true with the spleen and stomach health. In fact, only "holding the moderate way" is not enough, we must make good use of the upper burner and lower burner. The upper burner is the parts above the diaphragm, including the heart and lungs; the lower burner is the parts under the diaphragm, including kidneys, large and small intestine, the uterus and so on. The upper burner and lower burner have their own physiological features. The upper burner governs the breath and Qi, as well as the meridian, which is characterized by the diffusion. The essence of water and grain are transported to nourish the organs of the whole body like the fog, so it is said that "the upper burner is like the fog“. The lower burner takes charge of separating the pure and turbid, as well as excreting urine and stool, which has the characteristics of discharging downward and outward, so it is called that "the lower burner is profane". So the physiological functions of the upper burner and the lower burner are related to the way to transport Qi and the water. Therefore, holding the moderate way with applying two factors and the interaction of triple burners govern Qi of the body and take charge of Qi movement and gasification of the body. It is not difficult to understand that the circulations of Qi and blood start from the middle burner. In addition, holding the moderate way not just refers to the helping role that the middle burner drawing supports from the upper burner and lower burner. "Holding the moderate way" stresses the emphasis of the movements, while "applying two factors" is a generalization saying with the meaning of overall interaction. Such as, practicing the routine "Holding One Arm Aloft to Regulate the Functions of the Spleen and Stomach" can also exercise the facet joint and muscles among the vertebras of the spine, which is conducive to prevent and cure the symptoms of the shoulder, neck and lumbar. Driven with the strength of shoulders, the palms rising and falling, expanding the chest and abdomen, and stretching the waist and backbone can stimulate the Du channel, which masters the marrow connects the brain, going through the spine. Stretching and clearing the meridians within the neck, shoulders and spine, enhancing the circulation of Qi and blood in the facet joint and muscle can contribute to smooth the joints, strengthen the flexibility and stability of the neck, shoulders and spine, so as to prevent and cure the integrated diseases of the neck, shoulders and lumbar.

In short, the acquired nutritional sufficiency depends largely on the coordinate functions of the stomach. So we must pay attention to the prosperity and decline of the stomach and spleen. When people are ill, the prosperity of stomach can make sure the physical well-being; contrarily, the body is unhealthy. Therefore, we should master the view that the diffusion of Qi and blood starts from the middle burner, as well as discover a way to enjoy the ancient Chinese fitness regimen culture.