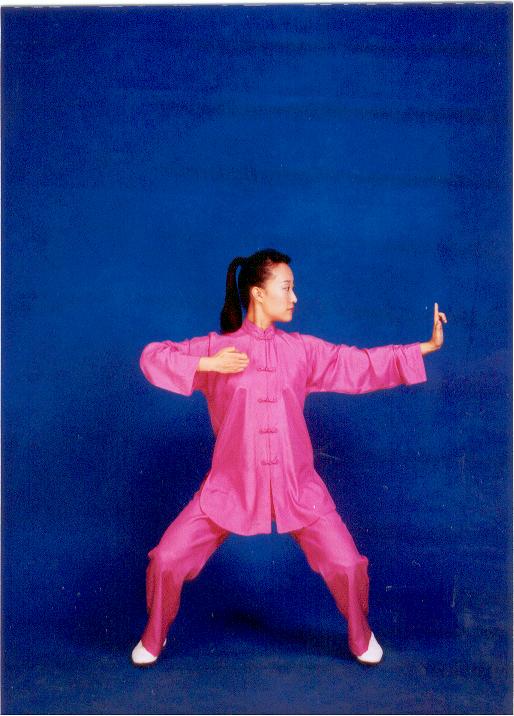 This article is about the appreciation of the methods. It is permeated with profound thinking on the exercisers who practice their skills and cultivate themselves between the lines. At the same time, it also makes people praise the satisfaction of behaving oneself. Despite it is not a professional article on methods and there are many imperfections, this article shows the idea that "being quiet and behaving oneself, strengthening the body while ensuring stability", and learns from the ancient saying that "shooters should behaving oneself before shooting", which has conveyed the essence that behaving oneself is first of all. General principles are implied in simple methods. Perhaps that is the infinite treasure left by colorful Chinese sports culture.

Quietness and stability are the obvious characteristics of this routine "posing as an archer shooting both left-and-right-handed". Therefore, opening and closing moderately is the central link of "being quiet and behaving oneself, strengthening the body while ensuring stability". In fact, here are a lot of instructions about archer shooting. It contains the ideas that opening and closing is helpful to body building in the ancient archery and shooting. Only the wills inside the body are positive, can the body outside be straight. It is not only the doctrine of kudo and shooting, but also the essence law to practice Health ·Qigong. Shooting in this routine embodies the doctrine of kudo and shooting, which not only implies the broad and profound artistic conception of traditional culture, but also makes people appreciate the essences of the cultural context, such as leading a quiet life without worldly desires and cultivating one's original nature. Some examples will be given in this article.

Standing still and peace of mind

Shooting with a peace mind requires for quiet. People who are good at shooting must be on peace of mind. The bow, arrow and shooter become an integral part and forgetting the outside world and oneself. Therefore, practicing the routine "Posing as an Archer Shooting Both Left-and-Right-Handed" should also be in such a quiet state. We might as well analyze this routine in two aspects.

On the one hand, we will talk about the body movements in this routine. It requests standing with feet shoulder-width apart and in a horse stance. Breathe in, with hands up and crossing on the chest. Breathe in, with hands up and crossing on the chest. Breathe out, with left hand making a fist. The forefinger and thumb open apart. The left hand slowly moves to the left of the body horizontally and the left arm keeps straight. At the same time, the right elbow is bent and moves to the right side of body. The right hand is just like in the pose of shooting. Look at the place between the forefinger and thumb. Keep the pose of shooting, while holding one's breath for a moment. You maybe count 10 numbers. It can be clearly found from here that the key movements in the process of opening and closing are "pushing slowly", "pulling with bent elbow" and "holding the breath for a moment", which seem to produce a quiet and natural artistic conception. Why should we be in a state like this when exercising? The reason is that the emphasis of the movements is to improve the blood circulation of thoracic vertebra and neck. It has certain treatment function to the cerebral concussion caused by cerebral concussion clinically. At the same time,make a rhythmic massage for the organs in the upper and middle energizer, especially for the heart and lung, which is favorable to the enhancement of cardio-pulmonary function. And through the chest expansion and arms outstretched, skeleton and muscles of the shoulder, arms and sternocostal part get exercise and enhance, which is helpful to keep right posture and correct harmful postures, such as, the adduction of shoulders and humpback. We can see that be nature and quiet, as well as calm mind in the process of opening and closing are not only our own requirements for the body movements, but also the way in practicing methods.

On the other hand, we will talk about the principle in the routine. It mostly influences the lung meridian of hand greater yin, heart meridian of hand lesser yin and governor vessel. Lung meridian of hand greater yin originates from the middle energizer, flows down to large intestine and returns back along the upper part of the stomach, through the diaphragm. It belongs to the lung. The major functions of the lung are like this. First, like a prime minister of the heart, the lung is responsible for regulating the moisture and nutrients of the body. It is in connection with the heart, in the upper energizer. The lung is like the canopy of five zang-organs. Lung conveys the essence of water and grain, as well as the clearing qi in the five zang-organs and limbs. While the lung conveys nutrients to the body, it also plays a role in protecting the five zang-organs.That is shield function of defense qi, which protects the invasion of cold evil. Second, it is believed in traditional Chinese medicine that, the lung has the physiological function of mastering Qi and managing respiration. “Lung governs all Qi”. The lung conveys clearing qi aspect to zang-fu organs, thus the heart qi, small intestine qi, liver qi, gallbladder qi, tendon qi, spleen qi, stomach qi, lung qi, large intestine qi, kidney qi, bladder qi, etc. are generated. Third, lung links with all vessels. Blood circulation depends on the qi movement, therefore it can assist the heart and regulate the flow of blood. Fourth, the lung is the kidney emetic therapy water. Governing dispersing and descending. Dispersing means exhaling, ascending and rising of the clear,and descending means inhaling, clearing and lowing the turbid qi. Fifth, lung opens orifice to nose, storing the soul. Soul governs the psychosis of human being. With sufficient essential qi, human beings will be healthy and sound. Flowing out from the lung system and getting down in font of the heart meridian of hand lesser yin and pericardium meridian of hand reverting yin, flowing along the front of upper arm and down to cubital crease, getting through wrist pulse and thenar along the front of lateral forearm, flowing away from the inner side of thumb along the thenar. The symptoms and sings governed by this meridian are cough, gasp, hemoptysis, chest tightness, angina, pain in the radial border of front of the arms, shoulder and back pain caused by coldness. Thus, serenity and relaxation, as well as peace of mind are necessary.