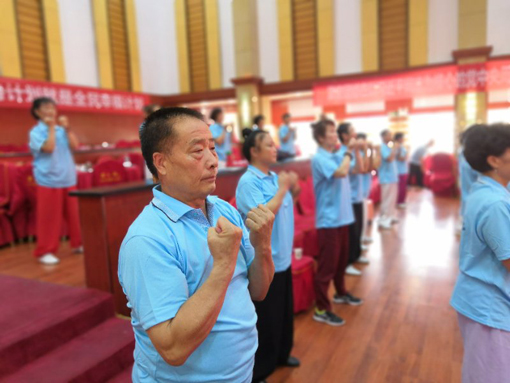 Humoral regulation mainly are the physiological processes that different kinds of hormones secreted by secretory cells of the human, or certain special chemical substances particularly act on certain organs and cells (named target organs and target cells) through blood circle, to regulate alternation, growth, development, reproduction and so on, for example, the influence of thyroxine and insulin on material metabolism. In addition, partial humoral regulation means that some chemical substances or metabolites produced by histiocytes can spread the partial tissue fluid, to change the activities of adjacent histiocytes. Human body is completely controlled by all kinds of glandular hormone secretions. Each organ and cell is influenced directly by these hormones. Therefore, when hormones are secreted normally, the human body can grow normally. If any kind of glandular is not secreted evenly, it can lead two kinds of illnesses from body and mind in various degrees. Health Qigong exercises particularly divided into different stages to stimulate three locations of upper elixir field, middle elixir field and lower elixir field, can make each glandular secretion function tend to balance and stability. The reason for it is that the three fields separately are relative to the meridians and points: Hinting, Chanson, and Shenmue, and link with Bahia and Haying into a line. These locations and its line are the very key gland of the human secretory system.

Situated in the location where is three inches deeper than Yintang between two eyebrows, upper elixir field, called Niwan, is the location of pitutary. Pituitary produces many kinds of trophic hormones; corticotrophin for instance, controls all the functions of every endocrine gland, and manages the growth of the human body. It is the “governing location” of the endocrine system. Centering in the pituitary, the upper elixir field goes upward to connect with hypothalamus, and the hypothalamus secretes releasing or inhibiting hormones to regulate secretion of pituitary hormones. Middle elixir field is situated in the Chanzhong between two breasts and over the muscular diaphragm. Going upward, it connects with thymus gland. Thymus gland secretes thymus hormones and closely relates to immunity system. Surrounding it are important organs such as heart, lung, liver, spleen, stomach and so on. Low elixir field is the location where essence and Qi are stored absorbed. Behind it bilaterally are kidney and adrenal gland, and over it is insulin and then below it are important glands of secreting reproductive hormones. Adrenal gland cortexes produce steroid chemical compounds, regulate the balance between water and electrolyte, and make an important part in the metabolization of sugar, fat and protein. Meanwhile, it can make organisms deal with emergency, and make human produce a very strong explosive force. Kidney also has an important endocrine function. It mainly produces reins, hematopoietins, and prostaglandins and so on, to regulate physiological activities like vasomovement, aldosterone secretion, bone marrow hematopoiesis, calcium metabolism. The laboratory test also shows that, Health Qigong exercises can influence many kinds of hormones compounding and releasing, and change their sensitivities. For example, after the middle- and the old-aged attending Health Qigong •Ba Duan Jin Exercises do practices for three months, the estrogen of female exercisers—estradiol increases obviously; the main male hormone of male exercisers who has attending the Exercises for six months—testosterone also increases obviously. It is clearly seen that many physiological reactions of Health Qigong can be achieved by the virtue of humoral regulation.

Most of endocrine hormones are directly or indirectly controlled by the center neural system. Under the conditions, humoral regulation becomes one link of neural regulation, and equal to an outspread part of reflex arc efferent pathway. It is named nerve-humoral regulation. It is in this way, the neural regulation and humoral regulation inter-relates with each other and function together to regulate the functional activities of the organism. Studies have found that Health Qigong exercises can adjust the function of the nerve-humoral regulation, controls visceral activities dominated by nerve, and regulates the life activities of the human body. For example, after the exercises gets into quietness, the frontal cortex of exercisers can downward influence pituitary and hypothalamus through the specific way, and urge adenohypophysis to secrete more neurohumors, enkephalin, for instance. These cerebral morphine substances can produce pleasant sensation, and improve self-regulation ability of exercisers’ organisms through receptors from tip to toe, and make the functional movements of body and mind come to the best state. It is a typical nerve-humoral regulatory process.